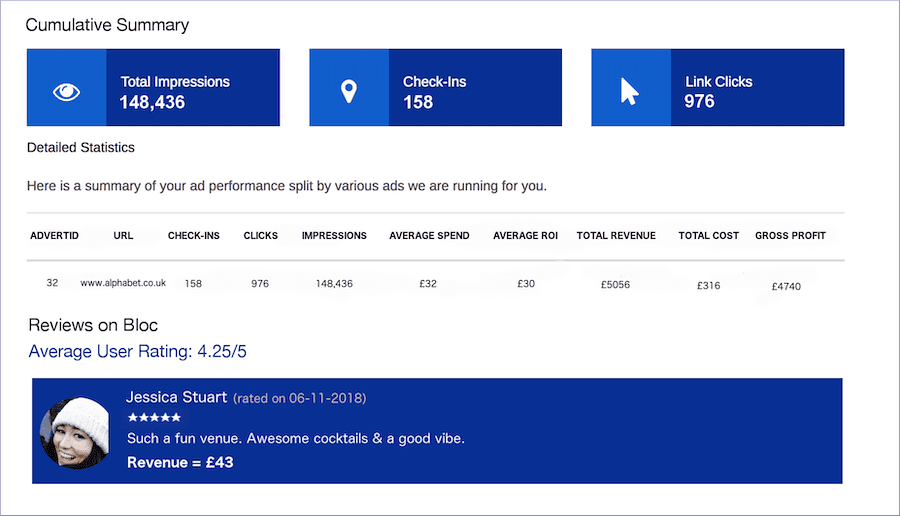 We have an exciting new update coming to the advertisers dashboard that will be rolled out this month to all advertisers. Listening to recent feedback we’ve decided to add revenue analytics to the dashboard. So now advertisers will be able to see the estimated revenue received from customers brought to their venues by Bloc.

This will work by asking the customer for their estimated spend when we ask for their review of the venue. Currently a customer, who attends an advertised venue, has to give a compulsory review of the venue the next day or the next time they open Bloc after 24 hours. This allows advertisers to get a feel for who has attended their venue and it’s also an opportunity to receive feedback. After the customer has rated the venue out of 5 stars, they will then input their estimated spend, followed by a written review which is optional. So the rating and spend will be compulsory but a written review is optional.

By receiving every customers estimated spend it means important data can be gathered. It allows an advertiser to see just how much revenue is coming from Bloc users. Here is the new data the advertiser will receive:

When a user attends an advertised venue they have to give a compulsory review of the venue the next time they open Bloc after 24 hours. Now we’ve added another compulsory step where they input their estimated spend.

In the advertiser dashboard an advertiser will be able to see the estimated spend each user has submitted. It is only an estimate and we appreciate some users will put inaccurate figures so it should only be used as a rough estimate. Advertisers will be able to report unlikely revenue or spend inputs so they can be removed from their dashboards. The purpose of this feature is so that advertisers can be confident that their ROI of using Bloc advertising is worthwhile. As we only charge £2 per customer including VAT, most advertisers should see a positive ROI.

Advertisers will be able to see the revenue analytics of each user under their written review.

Now we have the estimated spend of each user that attends an advertiser we can work out the average spend at each venue.

We charge £2 including VAT for every customer that attends a venue. So the average ROI (return-on-investment) is the average spend minus – £2.

Total revenue is the total estimated spend of every user for each specific advert ID.

Total cost is the sum of what Bloc charges for each check-in which is £2. As each advertiser receives £150 free credit this is also taken into account.

This shows the total gross profit for each advert ID/venue.

DO YOU WANT MORE CUSTOMERS ATTENDING YOUR VENUE? 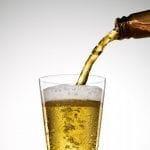 How To Increase Drink Sales In Your BarBloc 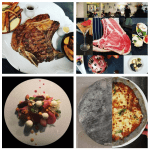